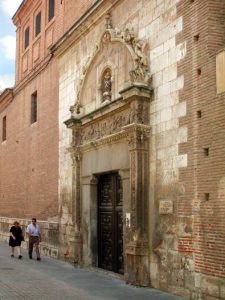 The Convent of the Image is the most representative of the Renaissance convents of Alcalá de Henares. It was founded in 1563 by the Blessed Sister María de Jesús in collaboration with Santa Teresa de Jesús and under the patronage of Dona León de Mascareñas, aya of Felipe II. The first convent was located in some houses of the Plaza de la Victoria and in 1575, the congregation moved to the current building, former palace of the Marquis of Lanzarote. At that time, the palace belonged to a certain Juan de Arenillas, who lost it in a game of cards, and became property of Luisa de Muñatones, who sold it to the nuns.

The Plateresque facade is attributed to Alonso de Covarrubias, who at that time was working in the Archbishop’s Palace. It is decorated with fantastic figures, grotesque and dragons and culminates in a niche with the image of the Immaculate under which is the shield of the Carmelite order, replacing that of the Marquis of Lanzarote.

This convent was visited on several occasions by Saint Teresa of Jesus and had as prioress Luisa de Cervantes, sister of the writer, on three occasions.

We use cookies on our website to give you the most relevant experience by remembering your preferences and repeat visits. By clicking “Accept All”, you consent to the use of ALL the cookies. However, you may visit "Cookie Settings" to provide a controlled consent.
Cookie SettingsAccept All
Manage consent

This website uses cookies to improve your experience while you navigate through the website. Out of these, the cookies that are categorized as necessary are stored on your browser as they are essential for the working of basic functionalities of the website. We also use third-party cookies that help us analyze and understand how you use this website. These cookies will be stored in your browser only with your consent. You also have the option to opt-out of these cookies. But opting out of some of these cookies may affect your browsing experience.
SAVE & ACCEPT

You can find out more about which cookies we are using or switch them off in settings.

This website uses cookies so that we can provide you with the best user experience possible. Cookie information is stored in your browser and performs functions such as recognising you when you return to our website and helping our team to understand which sections of the website you find most interesting and useful.

Strictly Necessary Cookie should be enabled at all times so that we can save your preferences for cookie settings.

If you disable this cookie, we will not be able to save your preferences. This means that every time you visit this website you will need to enable or disable cookies again.