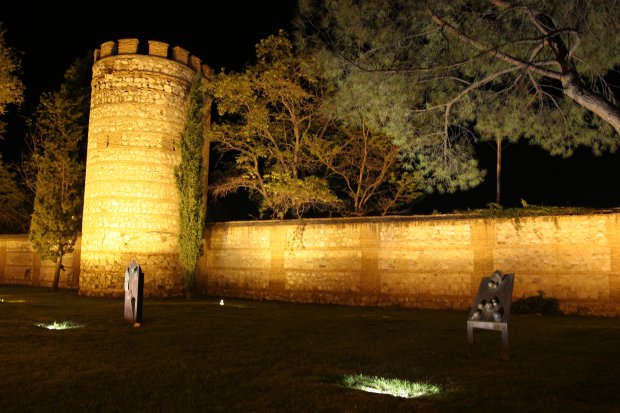 Of the old walled enclosure of the city the set of walls survives that, between the Door of Madrid (S. XVIII) and the Arch of San Bernardo (S.XVII), they surround to the Archiepiscopal Palace, to the call Orchard of the Bishop and to the monastery Cistercian San Bernardo, a space of some 50,000 km2. This enclosure began to rise at the beginning of S. XIII from some fortified houses, being extended notably throughout the XIV especially thanks to the Archbishop Tenorio. Of the original 22 towers, only 16 remain, and as for the doors, only the medieval gate of Burgos is preserved, currently inside the monastery grounds, so it is not visible. In addition, after a recent rehabilitation work in the area between Nebrija Street and the Complutense road, remains of the wall surrounding the city (towers, foundations, etc.) have appeared, as well as an old passageway inside the walled enclosure known as Alley of the Burned Furnace.

The Archbishop’s Palace was conceived as a defensive element of the city after the reconquest of it and its military nature was reinforced by Archbishop Carrillo, who made it his bulwark of resistance against Isabella the Catholic. Already in the sixteenth century, the palace is losing this function and begins to become a space for leisure and residence of several kings and queens of Spain, as well as other members of royalty, adapting to the new European Renaissance style.

In the nineteenth century the Archbishop’s Palace underwent a gradual decline palliated in part by becoming the Central General Archive of the Kingdom until in 1939 and once the Civil War ended, a fire and the subsequent plundering left us what we can contemplate today.