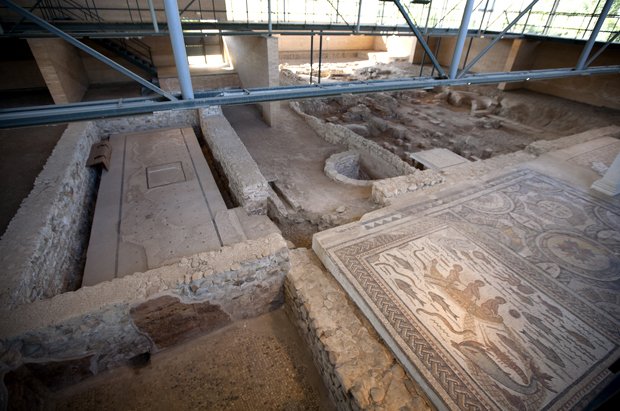 This house takes its name from the mosaic of the central hall that was made by the master Hippolytus as it consists in the mosaic itself. It is a recreational house where you can see the different rooms that make it up perfectly. The deposit is roofed and conditioned with walkways for better visualization. It is located on the outskirts of the Roman city of Complutum and was part of a group of buildings and gardens of the Anglian family of Complutense, including the funeral mausoleum of that family, discovered in 1881 and now disappeared.

What can be visited today responds to an act of charity of the Anios, who probably conceived it as the seat for a collegial group, with spaces for leisure and meeting and constant references to the fauna and vegetation of the Orient, cultural reference for the Romans The house dates from the 1st century AD although there is a pre-Roman occupation of the III – II a.C. However, its monumentalization and the preserved remains come from the third century AD. From the 5th century a Christianization of the whole and the development of a necropolis was already perceived.